Every project has its challenges and moments – I’ve certainly had one or two projects almost go south over the years, and there were times this one seemed it was headed the same way. As it transpired however, it turned into one of the most successful custom guitar builds I’ve known.

Whilst I’d built a nice little custom traditional ‘strat’ with a custom headstock design earlier in the year, I’ve always favoured the super-strat body shape, and really wanted to do something along that line. I decided to hunt down a Wesley acrylic-bodied strat for rescue and basic rebuild as I’m very fond of a number of their designs, and thought that a slightly abused and abandoned example might make for an interesting jumping-off point. I didn’t want something in excellent condition, that’d be like taking a classic car that’d been lovingly maintained for years, then chopping it up to build a hot-rod. There’s something almost barbaric about that. There are plenty of wrecks out there after all!

I couldn’t bring myself to properly photograph the original at the time, but it really wasn’t pretty, and was in considerably worse condition than the seller indicated (oh the joys of ebay).

After stripping it down, I set to restoring what could be restored, and making a mental list of components that could be utilised. That didn’t take long, because ‘body and neck’ doesn’t make for an especially long list. It does however make for a guitar! The body was in really poor shape, but the neck, fretboard, and frets were by contrast in good nick (save for the fact the truss-rod had been over tightened which I immediately loosened). I gave the fretboard the usual thorough cleaning and treatment, then dressed all the frets and set that aside. The body got a more unusual bath with hot water, scented candles, and lots of soap to get rid of the ingrained grease and tar before being left to dry whilst I decided on a plan of action.

Now, I don’t know if it was that scene in ‘Frozen’, you know the one (at least I assume you do, I haven’t seen it), but I suddenly had a flash of what the finish of the guitar could be: Opaque! That’s what I wanted. Not tinted or unnaturally ‘perfect’, just opaque,and frosty, like ice. What I didn’t know was how I was going to achieve it. I spent a week or so considering potential options, from sanding, to shot-blasting, none of which seemed like they’d work. I also searched online for previous designs or builds that had the effect I was picturing, but for once, I couldn’t find anything like it! It actually spurred me on to think I might be venturing into slightly unique territory.

Now, I’m not going to tell you how I did it, but did it I did, and I nearly dislocated my shoulder in the process. And just look at this thing, isn’t this beautiful!? 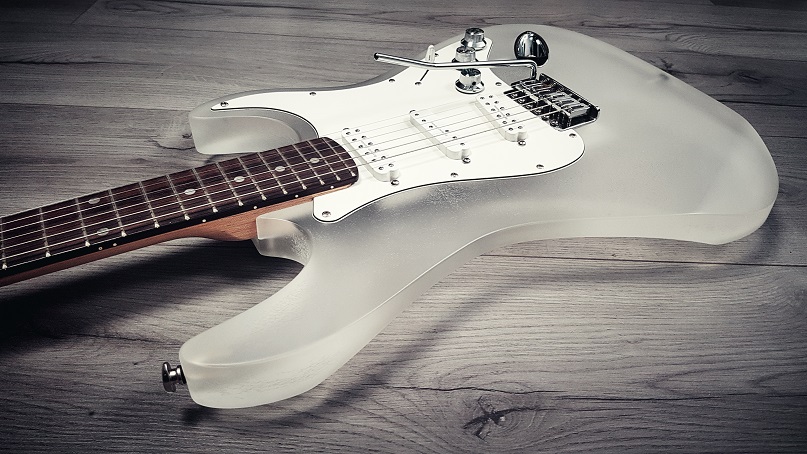 It’s a little impractical for live performance as it weighs just short of a metric ton, but that’s not what this is about. I’m very much a subscriber of the ‘form AND function’ brigade however, and I have little interest in ‘display pieces’. If it’s meant to be a guitar, then it better be a guitar. And you know what, this really really is. The neck is a delight, as is the symmetry and engineering of the body, a real testament to the quality of the instruments Wesley Guitars Ltd. designed and built in times past. John Wesley now runs ‘John Wesley Guitar Services’:   www.wesleyguitars.co.uk

I actually took the original pick-guard and sanded it down by hand with wet & dry until I got back to white. It was incredibly tedious, and nothing gives paper-cuts like wet & dry paper, but I liked the idea of it being reclaimed. It also meant it’d have the same matte finish I was going for. I fitted a new (basic) trem and arm, pickups, and electrics throughout, and added a new transparent pickup selector-switch tip which I’d also treated in order to match it to the body. With new chrome screws throughout, coupled with custom strap buttons and abalone-inlaid control knobs, this was really starting to look a bit special.

With the guitar built, and realising it was turning out better than I’d hoped, I decided to invest a little more time and money.

I replaced the nasty original string snappers with nice roller-type string-trees, and then installed a set of Schaller ‘Da Vinci’ chrome tuners, which are quite frankly stunning. 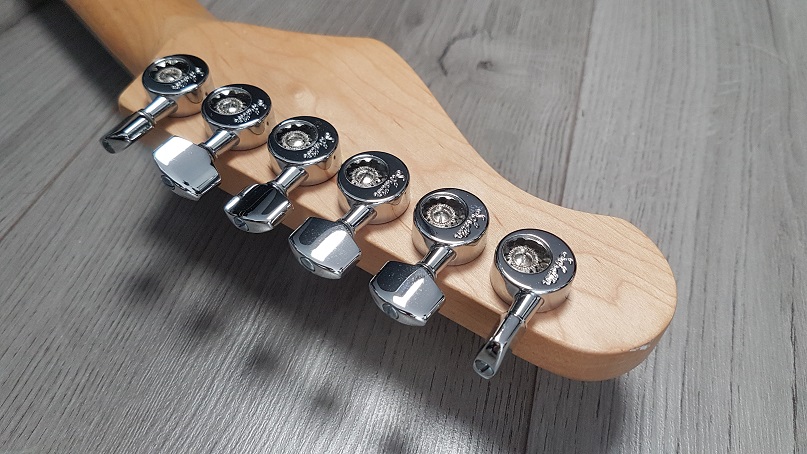 Next: Pickups. I decided to go with a Seymour Duncan ‘Everything Axe’ set, which consists of a ‘JB Jr’. bridge, ‘Duckbucker’ middle, and ‘Little 59’ at the neck. They’re essentially coil split-able small-form-factor humbuckers, which I felt would suit the super-strat styling, and most importantly add even more function to balance the form. Oh and they sound the business. They add some real guts, plus bottom-end which brings balance to the hyper-bright acrylic body, plus they’re incredibly versatile. 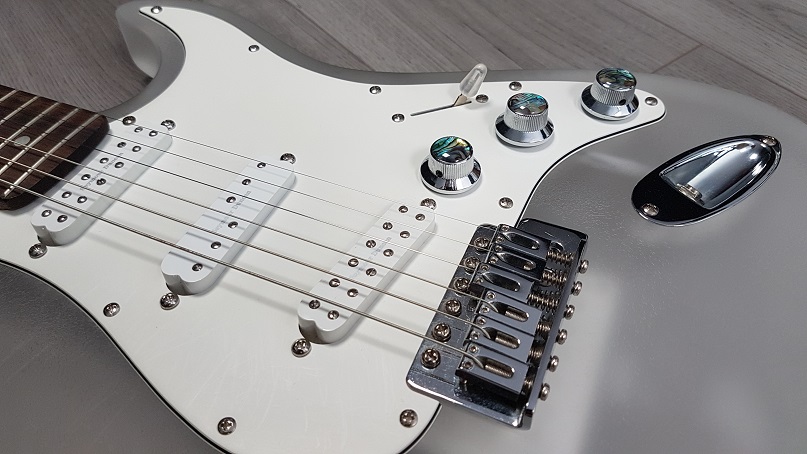 Now, how can you have a translucent guitar and not light it up!? I tried a few different options, but eventually settled with a simple battery pack and cold white LED string set in the cavities. Close Encounters of the Third Kind it isn’t, but whilst subtle, it’s incredibly effective in slightly lower light. 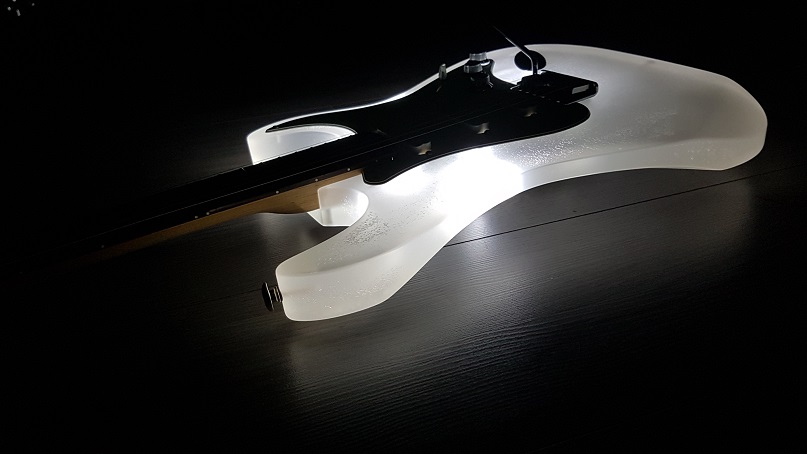 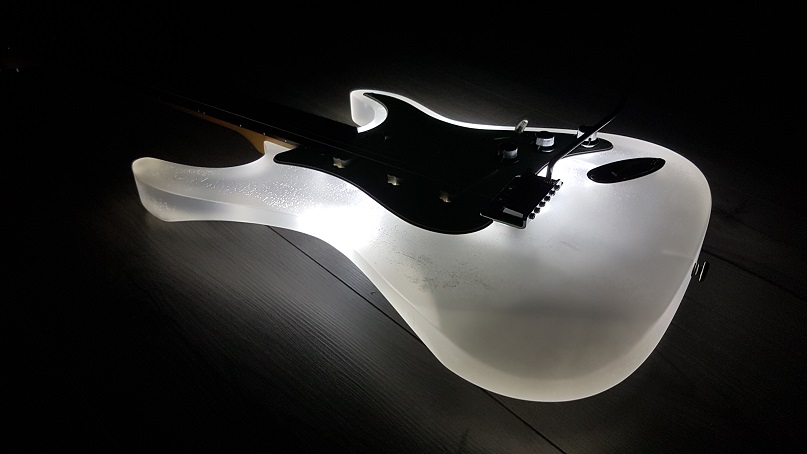 And thus ends another build, one that started out a bit ropey, but quickly snowballed into one of my most successful projects. I may liven-up the electrics with some creative phase switching between the awesome pickups, and perhaps upgrade the trem. For now however, my work here is done, and I have some playing-in to do……

This site uses cookies to ensure the best experience. If you continue then I'll assume you are happy with this.Ok